As the month of March comes to an end, I find that (a) it has flown by and (b) there is so much history to be told and discussed.  This certainly takes quite a bit of time to thoroughly research and ensure accuracy/legitimacy of the sources that are used.  Especially with political issues bombarding us in the media and in our everyday lives, it is appropriate to stress the need to become educated on political issues in our society; trying to the best of our ability to get the whole story. The final post in the Women’s History Month series,  highlights some of the changes that occurred after the passage of the 19th Amendment to the U.S. Constitution which resulted in the formation of an organization whose purpose is just that…educate the community on political issues. Now, it is important for everyone to know what the 19th Amendment states, since it was a pivotal legislative decision that still affects us today.

The Lakewood Women’s Suffrage Party, formed in 1912, worked diligently for five years to pass a local measure to include women in local government decision-making.  These efforts eventually resulted in the 1917 vote that allowed the Lakewood Ladies to officially participate in the democratic process.  It was not until 1920 that states voted to ratify a national Women’s Suffrage amendment.

There is some debate, looking at the newspaper clippings we have in our collections about whether or not the Lakewood chapter of the LWV is the oldest in the state, or the second. However, the fact remains that it was one of the first to establish itself after the 1920 ratification of the 19th Amendment!  In 1924, two years after the establishment of the Lakewood LWV, its membership numbered 481.  In 1967, in celebration of the first 45 years of the LWV, one of the original members, Mrs. Jesse W. Woods, reflected that, “[W]hen we organized the league back in ’22 women were very ignorant of politics and very uninterested…They didn’t even know parliamentary procedure…”

END_OF_DOCUMENT_TOKEN_TO_BE_REPLACED

March 15, 2016, is the day when the state of Ohio will vote in its primary election; determining which Democrat and which Republican will get the most delegates for their respective parties to represent the state of Ohio at the nominating national conventions. Cleveland is even the site of the 2016 Republican National Convention (RNC).  This year, in particular, is a unique primary season, to say the least. But, how many know that Lakewood has its own unique and profound history with the political national conventions?  Lakewood was home to the first women to be elected as a delegate to the Democratic National Convention in 1920.

Bernice (Secrest) Pyke, a well known and celebrated member of the Lakewood community, graduated from high school in Chillicothe in 1898 and then studied at Ohio Wesleyan University and at Smith College in Massachusetts. She taught mathematics in Illinois and in 1906, married Arthur B. Pyke. 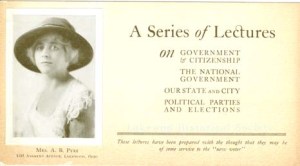 Bernice was a prominent suffragette in Lakewood and assumed the presidency of the Lakewood Women’s Suffrage Party in 1914 where she raised $400 from the district which earned her the distinction raising the most funds in the Greater Cleveland area. 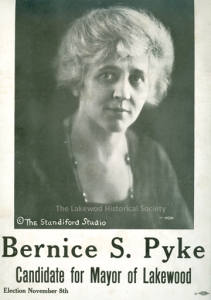 Pyke also was the first woman to campaign for Mayor of Lakewood, hold a cabinet position in Cleveland City government, and, as stated previously, served as a delegate to the Democratic National Convention in 1920. While she was unsuccessful in her mayoral campaign, Bernice continued her involvement in politics with a state senatorial campaign and addressed the 1932 Democratic Part at the convention where she was skeptical of presidential candidate, Franklin Delano Roosevelt.  After Roosevelt’s victory in the 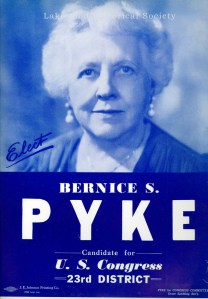 presidential race, he actually appointed Pyke as the director of customs collection for Ohio, which she held for 20 years and two presidents waived the mandatory retirement age for her. Those presidents were Harry Truman and Dwight Eisenhower.

Throughout all of her political involvement, Bernice also was noted as one of the founding members of the Lakewood Public Library and even owned her own bookstore on the corner of Detroit and Cook.  At the Lakewood Historical Society, we maintain and care for items that dealt with Bernice Pyke, as well as the Lakewood Women’s Suffrage Party.  She stood out as a pioneering woman who had a great influence on both her local community and gained national notoriety through her service in local affairs, as well as in national politics.

As I’m pulling artifacts, pictures, and documents to go in our upcoming exhibit Roaring Lakewood: The 1920s & Lakewood, I’m discovering more and more interesting facts about Lakewood’s history.  For interest, we have a collection of The Cinema, Lakewood High School’s yearbooks from the 1920s. It is amazing how talented the students of L.H.S. were.  In these yearbooks, students drew pictures, and put the publication together!

Since it is March, I’m trying to keep in mind the various activities and 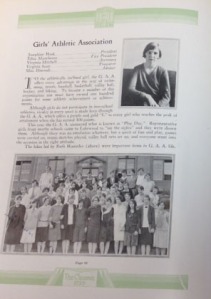 influences the women and girls of Lakewood had on our community, state, and country. For instance, as I’m looking for just the right piece from The Cinema to go in our exhibit, I came across the Girls’ Athletic Association entries. In a time when we are so used to women being involved with sports like basketball, tennis, volleyball, field hockey, and swimming, it can be easy to overlook the athletes of decades past. The 1970s brought with it the passage of Title IX, allowing for the inclusion of girls in sports across the country. But, how many realize that girls and young women participated in sports prior to that at L.H.S?  According to the 1929 edition of The Cinema, the Lakewood High School female athletes 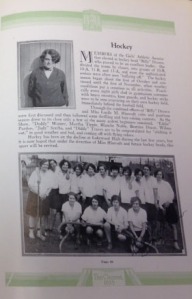 did not compete inter-scholastically with other schools, like their male counterparts. But, they were fiercely competitive. Just some of the sports these young ladies participated in included hockey (this was not the hockey we associate with ice and a puck, it was instead field hockey), basketball, volley ball [sic], tennis, and even life saving.

Many more girls participated in sports throughout the history of Lakewood High School. Seeing the various sports these young ladies participated in made me think about other sports and and how many female athletes were represented in larger competitions, such as the Olympics.  According to the International Olympic Committee’s Women in the Olympic Movement, updated just two months ago, the only sports where women competed were in Tennis, Golf, Archery, Skating, Aquatics, Fencing, and Gymnastics from 1900-1928. Out of close to 1,000 athletes competing in the Olympics at the time, only a very small percentage were female.  It certainly is intriguing to think about women’s involvement in sporting events and those ties to local history.

Votes for Women! That slogan is synonymous with a large movement that occurred throughout the country and abroad during the mid-19th century through the early 20th century. With focus on big name women like Elizabeth Cady Stanton, Susan B. Anthony, Mary Chapman Catt, and Alice Paul, it can be easy to overlook the importance of local women in the struggle for women’s suffrage.  In our new exhibit Roaring Lakewood: The 1920s & Lakewood we highlight the contribution of many Lakewood citizens in the advancement of women’s right to vote.

Like other areas throughout the United States, Lakewood was a city where women earned the right to vote before the national amendment.  While the first states to grant women the right to vote were in the Western portion of the country, they did so to challenge growing populations of immigrants and to provide greater representation of the population on issues. 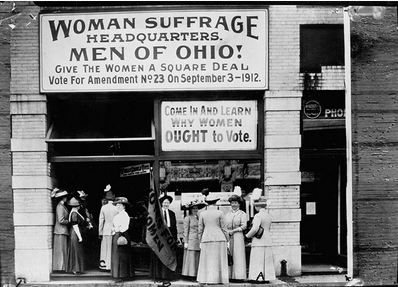 However in Lakewood, its citizens campaigned for the inclusion of women voters starting in 1912.  Organizing in 1912, the Lakewood Women’s Suffrage Party advocated for the inclusion of women in the democratic process. Nnot only women participated in this organization, but women’s husbands campaigned as well to grant their wives and daughters the right to vote.  In 1917, the people of Lakewood put before the City Council the issue of women’s suffrage. The council passed in Lakewood, but a similar bill failed at the state level. The issue statewide on women’s suffrage failed again a year later. It was not until the ratification of the 19th Amendment that Ohio voted for the rights of its women to vote.

After The First World War the issue of women’s suffrage was again put before the nation and in 1920, states voted to ratify the 19th Amendment.  After the 19th Amendment went into law, the Lakewood Women’s Suffrage Party transformed into the Lakewood League of Women Voters.  This organization, like countless others across the country, is still active today. Its purpose is to educate the public on political issues not only about women, but political issues in general.  It can be a source of unbiased information about local, state, and national issues that appear on the ballot. Many women who urged for the inclusion of women went on to serve in other areas of politics that will be discussed in future posts.

February is Black History Month, but how many of you know that March is Women’s History month? March 4, is actually celebrated around the world as International Women’s Day. Women of Lakewood had, and continue, to impact our community through their roles in politics, social organizations, education, and community change. 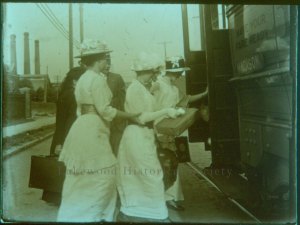 Much like what we did at Lakewood Historical Society over the course of February, highlighting the unique and important role African Americans played in the history of Lakewood, we will showcase many of the achievements and impacts of Lakewood’s Women. Stay tuned for our first installment of the Ladies of Lakewood series…Votes for Women!